View full video
Excluyendo cupones de descuento
260 reviews
Promoción
Mid Year Sale ENDS IN
Use code "MY80" to get €80 off! Worth every penny! Did a lot of shopping before picking this chair and after using it for almost a week, I am very glad i did. Really comfortable, lots of adjustments, what more could you want in a chair? Thanks Boulies, you guys rock!

I received my Boulies Master last week, assembled it, and noticed immediately there was a defect. The chair could move up and down, but not when I wanted it. When I sat down, the chair went down. When I stood up, the chair moved up. The gas lift was broken.
I contacted customer support and sent them a video and got an immediate response. A new gas lift was already in the mail. I really spammed them with questions, and received excellent service. Through email support, they helped me through the disassembly, and reassembly of the chair and responded to email almost always within an hour. The best is, that I can now actually use the chair effectively and it is amazing. Thus: starting off with a broken component is not ideal, but! Both the chair and customer support are amazing. This is why I would highly recommend Boulies.

Purchased the Master chair.
Delivery and setup wasn't bad, put together by myself.
For about five months the chair held up great, until it didn't.
As you can see from the picture, the cushion where you sit is flat, and the sides are somewhat raised. There are metal bars in the raised part, which after some use broke down and the metal bars became more prominent and became uncomfortable and required readjusting how you would sit.
The biggest issue was with the back rest. Not sure if it was the handle, or if something snapped in the back, but the rest itself would move freely. There is a handle to prevent any movement once you found the optimal angle, however the chair became unusable due to not being able to use the back rest...It had no stop. I reached out to the warranty department to take advantage of the 2 year warranty. .In my initial email, I sent a video of the issue, adjusting the handle, showing exactly what was going on. We ended up having to discard the chair as it was becoming a hazard with our little children. Boulies asked for more video, asked me to disassemble part of the chair where the handle was. Due to us having to get rid of the chair I was unable to provide the disassembly video. With all of that said, Boulies would not honor the replacement - only offered me a $50 credit towards a new chair...There is a current promotion which would provide you with $30 off a new chair, and the $50 did not stack on top of that $30....So - to be fair, they offered me $20 towards a new chair replacement. Was debating on a 2 star or 3 star rating....For what the chair was, it was good before it started to break down. The warranty leaves a bad taste. I am 6'1", 260lbs. and spend about 10 hours a day in the chair for work. When spending this kind of money for a chair - I would hope the company would stand by their product. In this situation, Boulies did not.

Hello, so sorry for the bad experience with our support team. Half a year ago, you contacted us that the issue with your chair but we can't confirm which part is broken: the backrest or the seat base. So we ask for the details and request more clearer video. And once we confirmed, we were ready to send you the replacement part to resolve the issue. But you didn't reply to us until recently and you told us that you throw away the chair and just wanted a new chair. Apologizes that It's really against our warranty policy and we're hard to apply you a free new chair. Our support team is always here to service each customer in our best effort and hope they can have the best experience with us.

The chair is really a must if you work from home or a hard core gamer. Compared to SecretLabs you pay much less for the same/similar features.

Amazing finishing. I have already tested 3 chairs from competitors before getting to this one. Absolutely comfortable and Wow, I wish I found this chair before. pcgamer.com
Boulies master series computer chair review
Hope Corrigan
Most computer chairs marketed towards gamers are a bit outlandish. They tend to be that race car design with high contrasting colours. Even the all black ones can have those tell-tale little flares like holes in the headrest screaming that they are, in fact, for games and not work. As an adult who doesn’t always want to be rocking the RGB4LYF aesthetic, this can make buying a gaming computer chair a little more difficult, especially in the lower and mid tier price ranges. 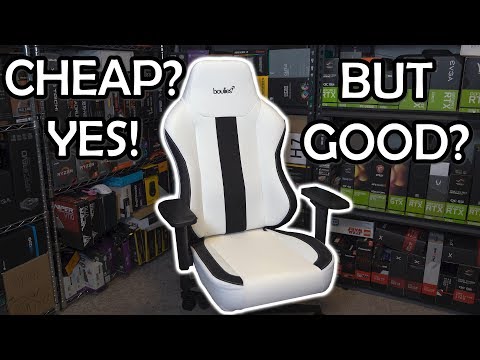 youtube.com
How To Spend Less On A "Gaming Chair"
BPS Customs
Is the Boulies Master a worthwhile purchase? I spent a month with one to find out. topgamingchair.com
Boulies Gaming Chairs Review: Is This A Good Gaming Chair Brand?
Carl
If you are a fan of gaming chairs, you probably know what you are looking for when choosing a top brand. In an ocean of big brands, award-winning models and so many different styles and options, it is hard for a new brand to produce a best selling model that people would choose over some of the most popular gaming chairs out there.